Our top San Francisco attractions picks include some of the major attractions in the city!  We chose our top 10 suggestions for a fun family vacation to share with you! 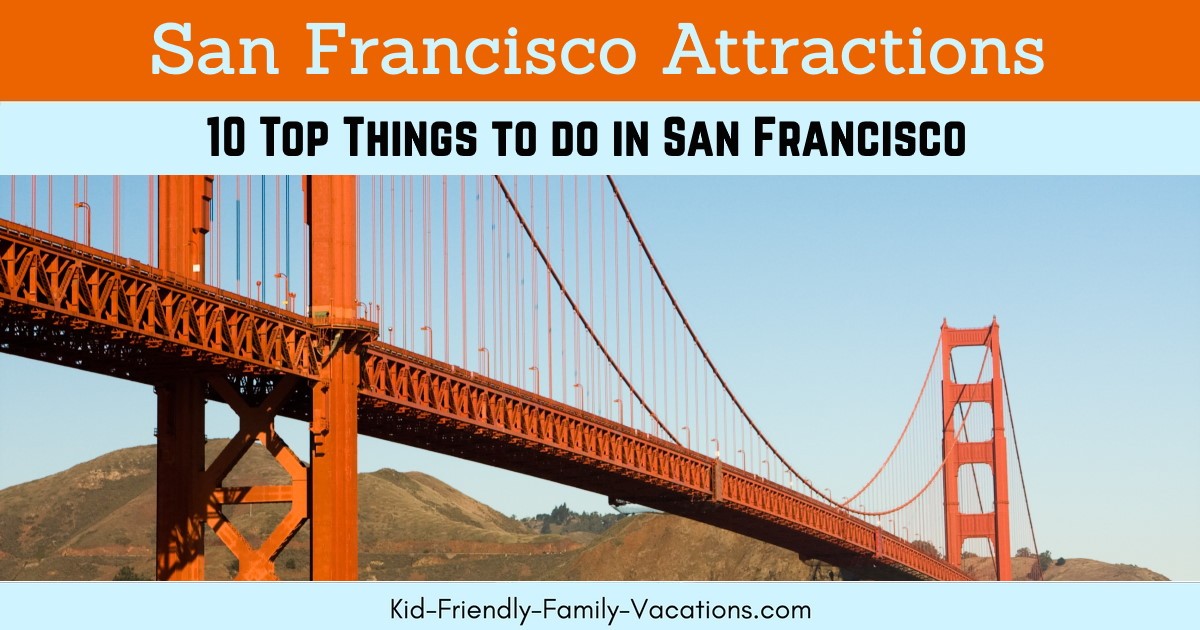 San Francisco is one of my favorite places to visit. The city is large, but it is very easy to get around. Like so many other places that you can visit, there are just so many things to do and see there. 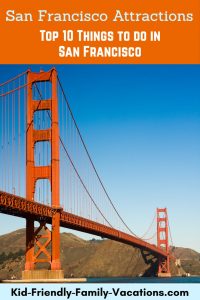 In San Francisco, you can enjoy all the sights, sounds and flavors of the city, including the world-famous cable cars. San Francisco is such a beautiful city…. And very large! The city goes on for blocks and blocks in all directions, and the beauty is amazing. It is, by far, the easiest “big city” to get around in that we have ever visited.

There are many, many things to do and see in San Francisco. You will find attractions in the downtown area that will keep you busy for hours. Then there is major league baseball (two teams!), bridges, parks, restaurants, shopping, and many fun places to explore that are just a short drive from town.

Here are out top 10 picks for things to do in San Francisco!

The bridge offers a majestic view of a great portion of the city and surrounding areas. It spans 4,220 feet across the Golden Gate Strait which connects the Pacific Ocean and the San Francisco Bay.

The San Francisco Municipal Railway (MUNI) operates cable cars all over the city. The cable car system is owned by San Francisco’s Municipal Transportation Agency. Today, it is the only remaining manually-operated system worldwide.

There are three cable car lines in San Francisco.  You can read about them and how cable cars work on our San Francisco Cable Cars Page.

And even more reviews on TripAdvisor! 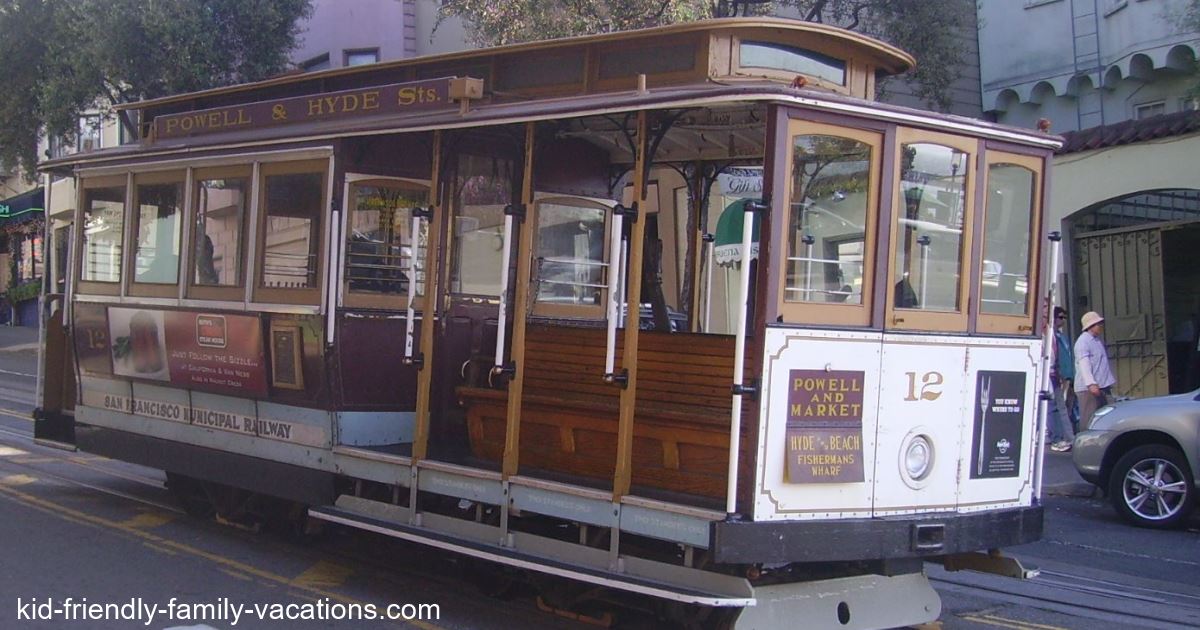 The Coit Tower sits above the San Francisco skyline on Telegraph Hill. The tower is 210 feet tall, but it sits on one of the highest points in the city – close to the bay.

The tower was built in 1933 with funds from the estate of Lillie Hitchcock Coit.

Lillie Hitchcock Coit had a love for firefighting!  When firefighters would be short-handed, she’d willingly lend a hand. This selfless practice began when she was  fifteen years old, and continued most of her life.

The Coit Tower, a National Historic Site, houses an observation deck. From the tower, you’ll see some of the most amazing views of key points in San Francisco. 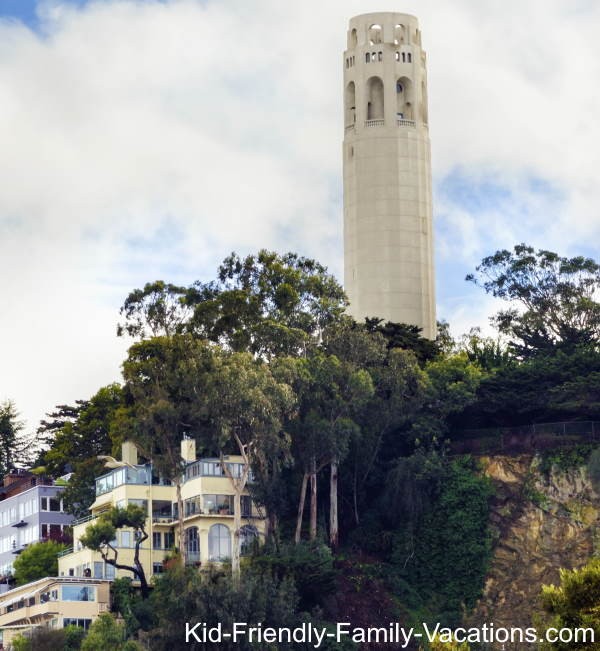 Pier 39 – One of the Top San Francisco Attractions

Because sea lions frequent the area, Pier 39 is also known as The Sea Lion Pier. Since the first sighting in 1989 was reported, these adorable sea animals have considered the pier their home.

Learn more about Pier 39 on our page and more reviews on TripAdvisor. 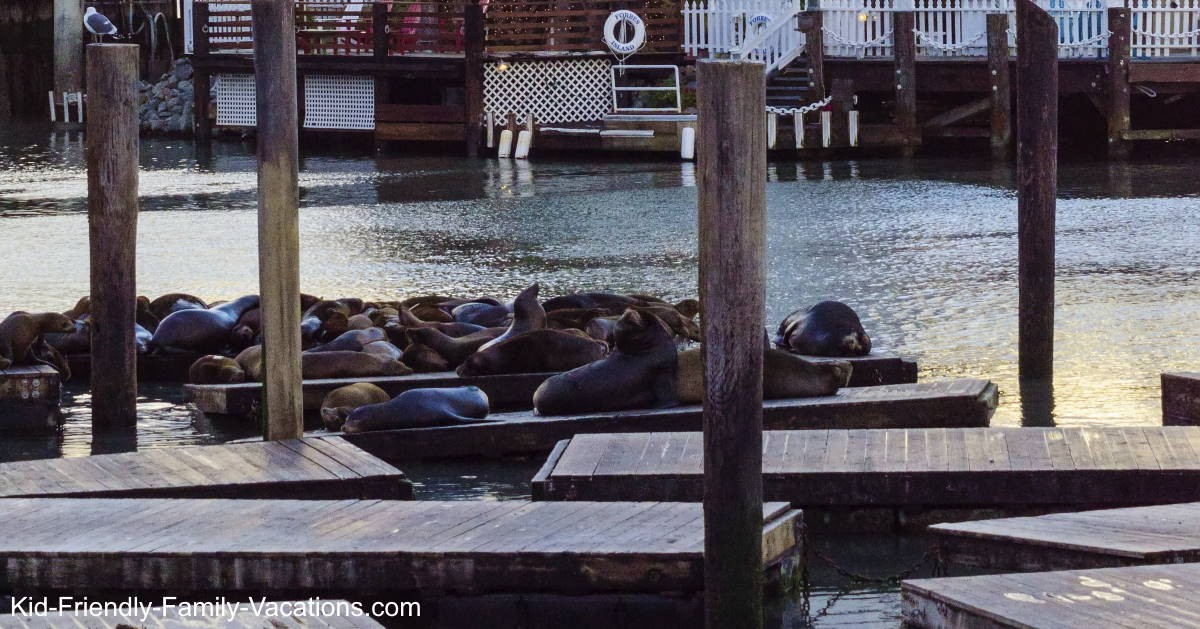 The street is picturesque because it has lush greens and dainty flowers at every turn. The neighborhoods along Lombard Street are composed of posh Victorian mansions. 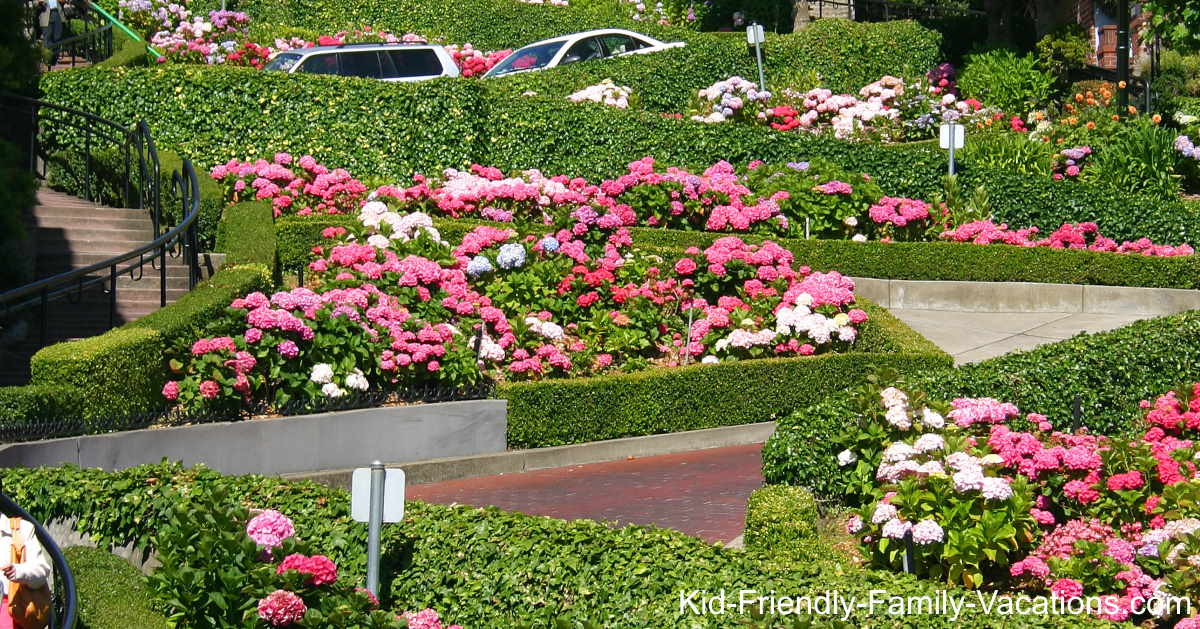 You can roam around the San Francisco Maritime National Historical Park to see the Hyde Street Pier and Pier 45. You can also take a closer look at old watercraft like the 19th century cargo ship, Balclutha, and the World War II submarine, USS Pampanito.

Most visitors spend a lot of time in the museums at Fisherman’s Wharf. Fun museums like Madame Tussauds Wax Museum, Ripley’s Believe It or Not Museum, and the Musée Mécanique, which has over 300 hundred mechanical games like penny arcades, music boxes, and love testers. 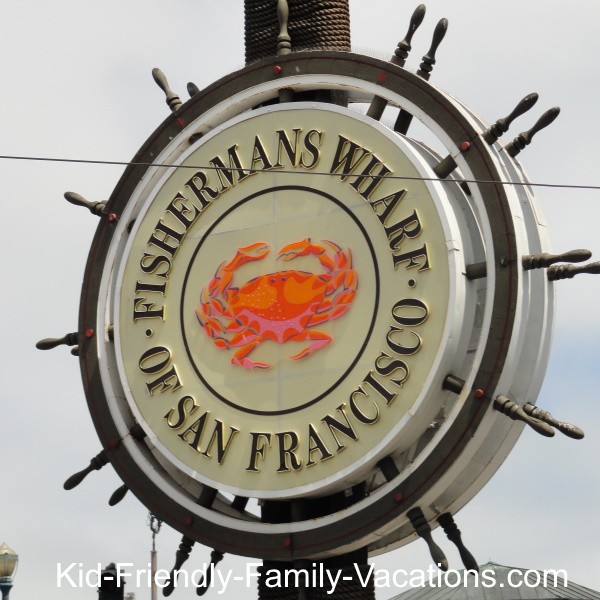 One of the top attractions at Fisherman’s Wharf in San Francisco, California is the Ghirardelli Square. It is a historic public square that has various restaurants and shops.

Tourists like the classic feel of the Ghirardelli Square because it is more than 100 years old. The structure of the commercial complex dates back to 1893.

The Ghirardelli Soda Fountain is a highlight – take a look! 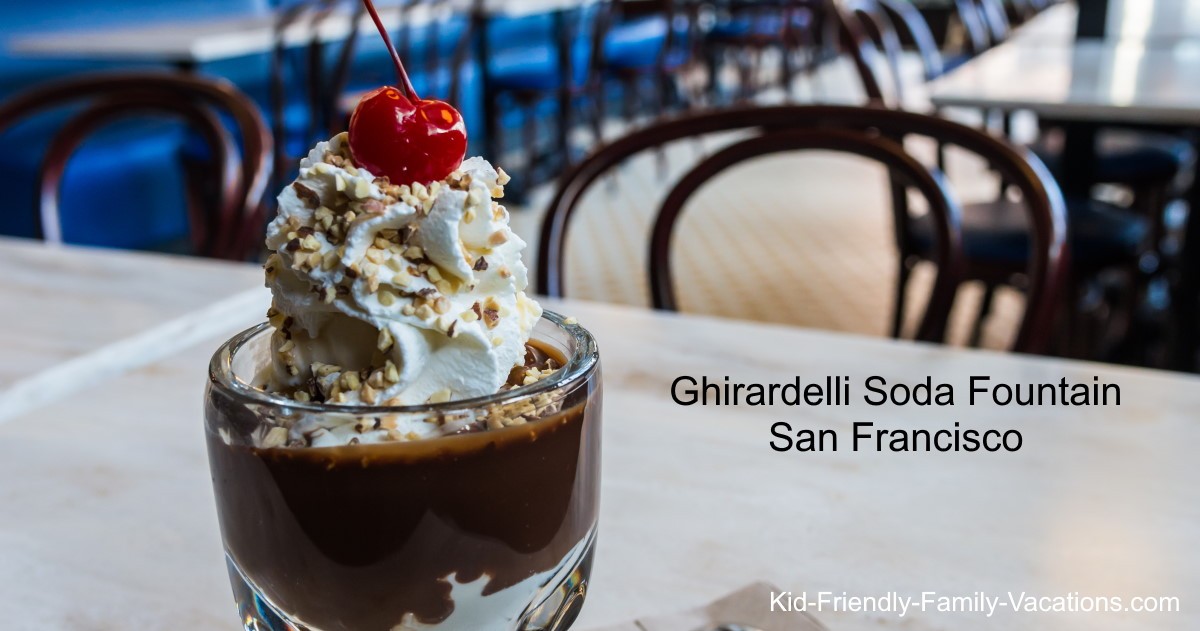 The neighborhood of Chinatown in Central San Francisco has the largest Chinese community outside of Asia. It is home to more than 100,000 residents.

The Dragon Gate or Gateway Arch is the entrance to this vibrant neighborhood that is rich in culture and traditions. It is the oldest Chinatown in California and the rest of North America.

It was established in 1848 by immigrants from Guangdong Province in southern China. In the 1960s, a huge number of Hong Kong immigrants came in. 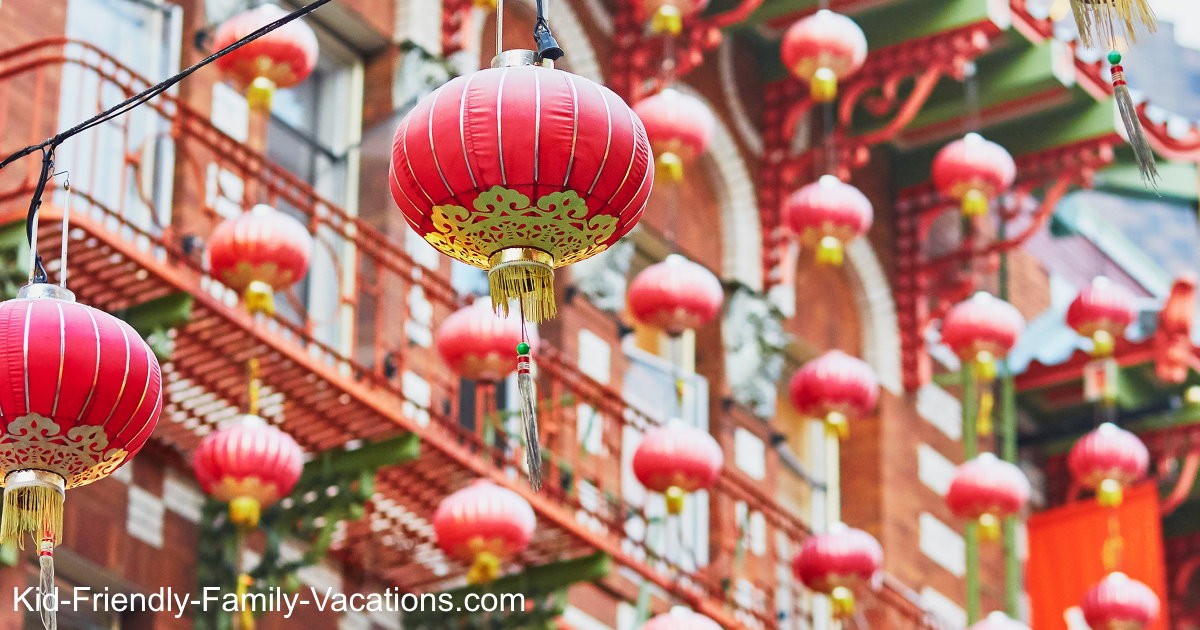 Alcatraz Island in San Francisco Bay is among the top tourist spots in California. It is a small island that is 1.25 miles away from San Francisco.

The Alcatraz has a prison, military reinforcement, and lighthouse. These facilities, however, have long been abandoned. They just serve as reminders of the past.

The U.S. Army and Bureau of Prisons built the Alcatraz structures in 1847 and designed them with a Spanish Revival style. The Alcatraz is part of the U.S. National Register of Historic Places. 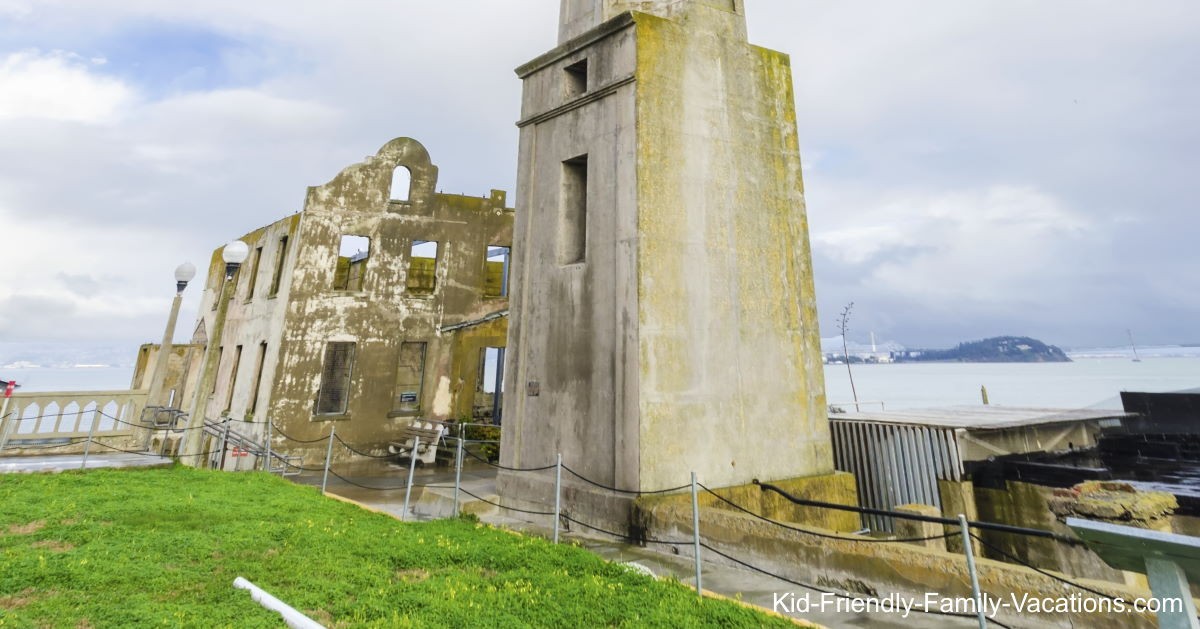 The San Francisco Zoo is a different type of zoo. It does not just have animals that are in cages. Some of its animals can roam around freely in exhibit areas.

The San Francisco Zoo is a vast space covering 100 acres of land. It has more than 1,000 animals from over 250 species.

It was opened in 1929 along the Great Highway, which is between the Pacific Ocean and Lake Merced. Its first animals were a cape buffalo, two spider monkeys, two zebras, three elephants, and five rhesus monkeys.