The history in downtown Charleston SC is palpable – you can feel it just by walking down the street.   It won’t take you long to get a sense of the history of the city when you look down and see the cobblestone streets.  Catch a glimpse of the horse drawn carriages, the old historic churches and the historic mansions that dot the downtown area.

Here are 10 pieces of history not to be missed in downtown Charleston. 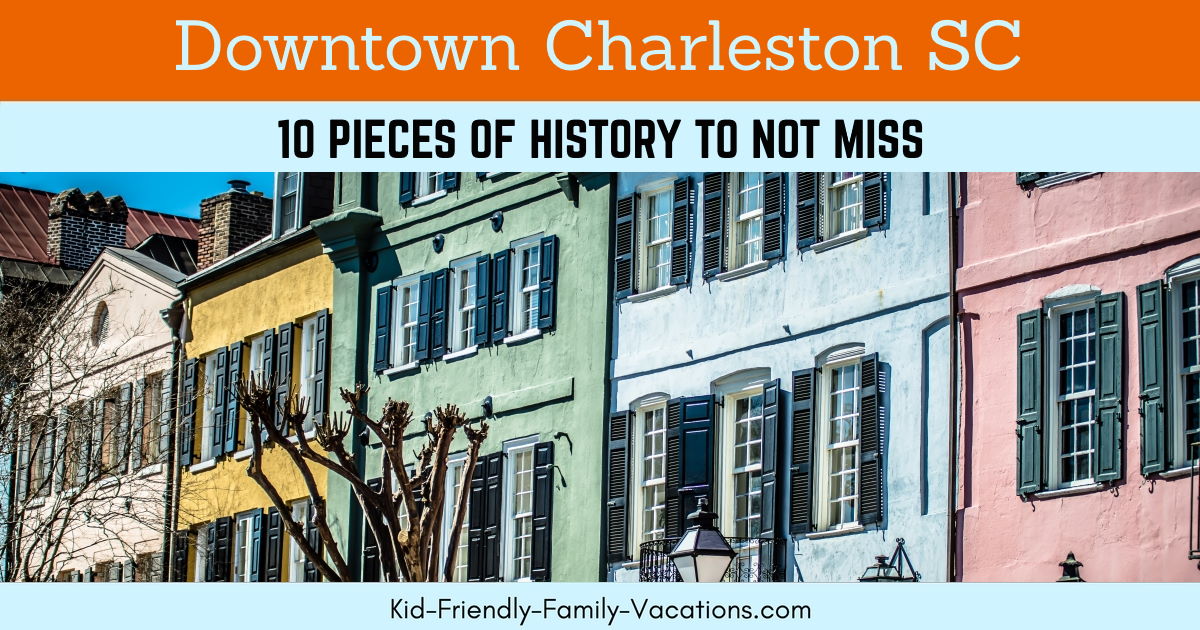 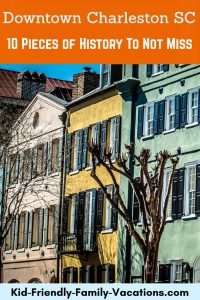 The first bridge constructed to cross the Cooper River was the 4.3-kilometer Grace Memorial Bridge. It was a privately-owned bridge that charged a one-dollar toll for cars to cross. Tolls were stopped in 1946 after the bridge was purchased by South Carolina in 1943.

When tolls were stopped, the bridge started to deteriorate. Citing insufficient capacity and reduced lane width, the government constructed another bridge in 1966, the Pearman Bridge, to run alongside the older Grace Bridge. By 1979, because of lack of maintenance, the two bridges were declared functionally obsolete.

Construction of a new bridge was proposed, later to be named Arthur Ravenel Jr. Bridge. The bridge was named after the congressman who pushed for funding support from different agencies. Overall cost to finish the project was $700 million. The Federal Highway Administration and the State Infrastructure Bank shouldered the majority of the funding. 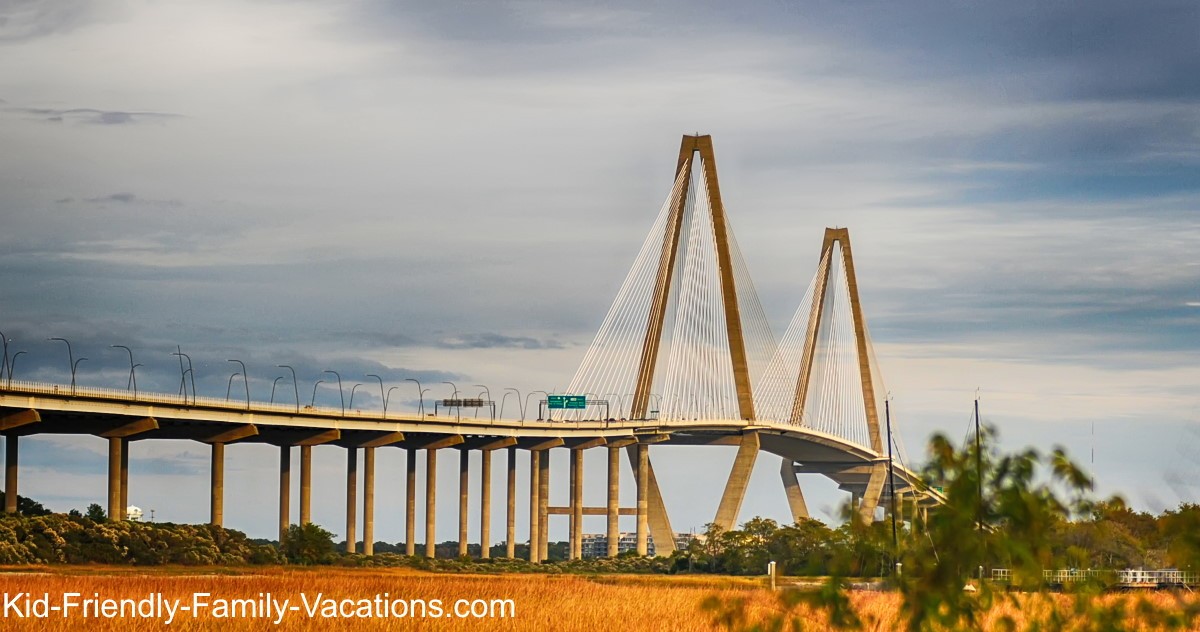 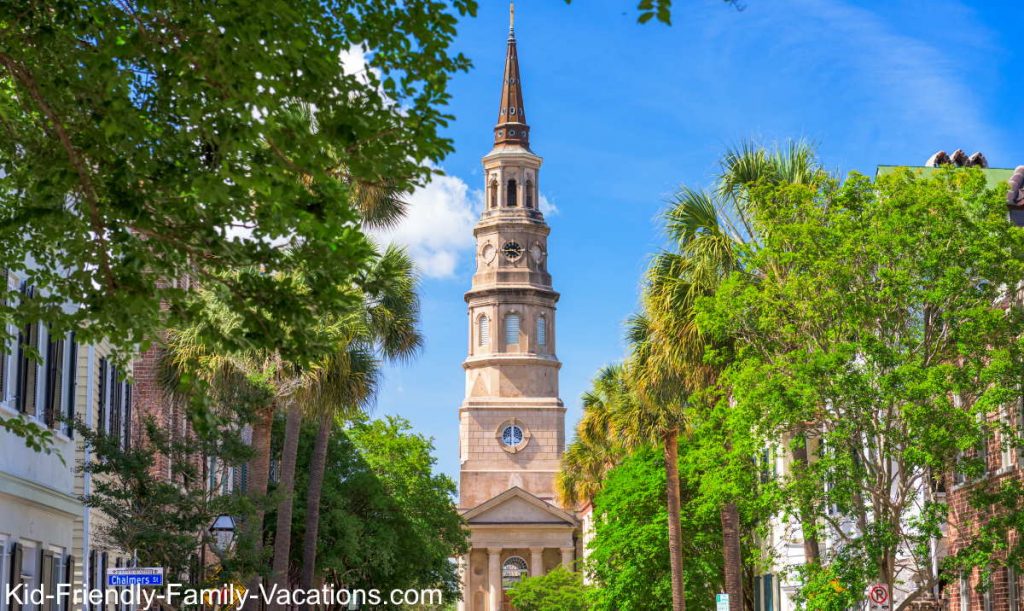 This is the French Protestant Church of Charleston.  It was founded in 1681.  The church depicted below is the third church built on this land and was dedicated in 1845. 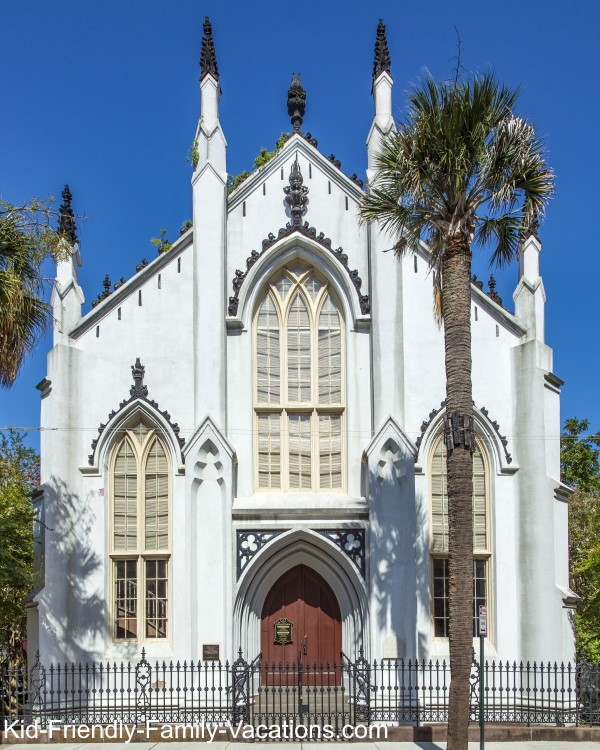 St. Michael’s is also an Episcopal Church.  It was formed after the congregation of St. Philip’s divided in 1751.   This is the oldest church building existing in Charleston. Several historic figures were known to worship here including George Washington (1791) and Robert E. Lee (1861). 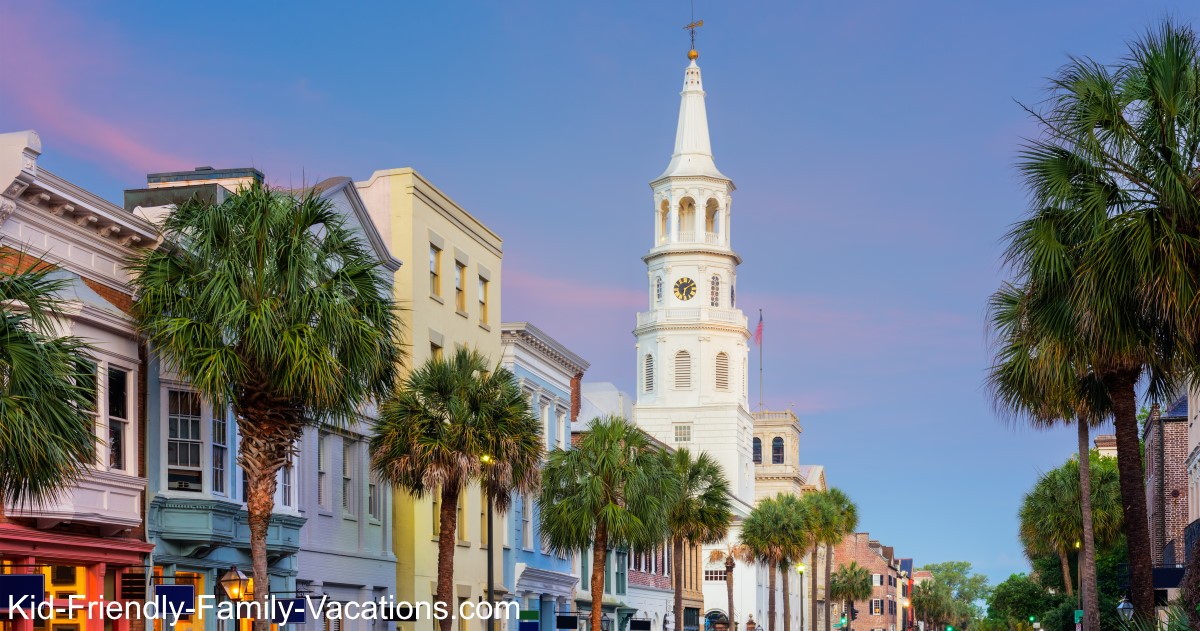 The historic downtown area of Charleston is full of old homes that have been preserved or restored.  Many are open for touring.  The photo below is representative of the homes you will see all over the downtown area. 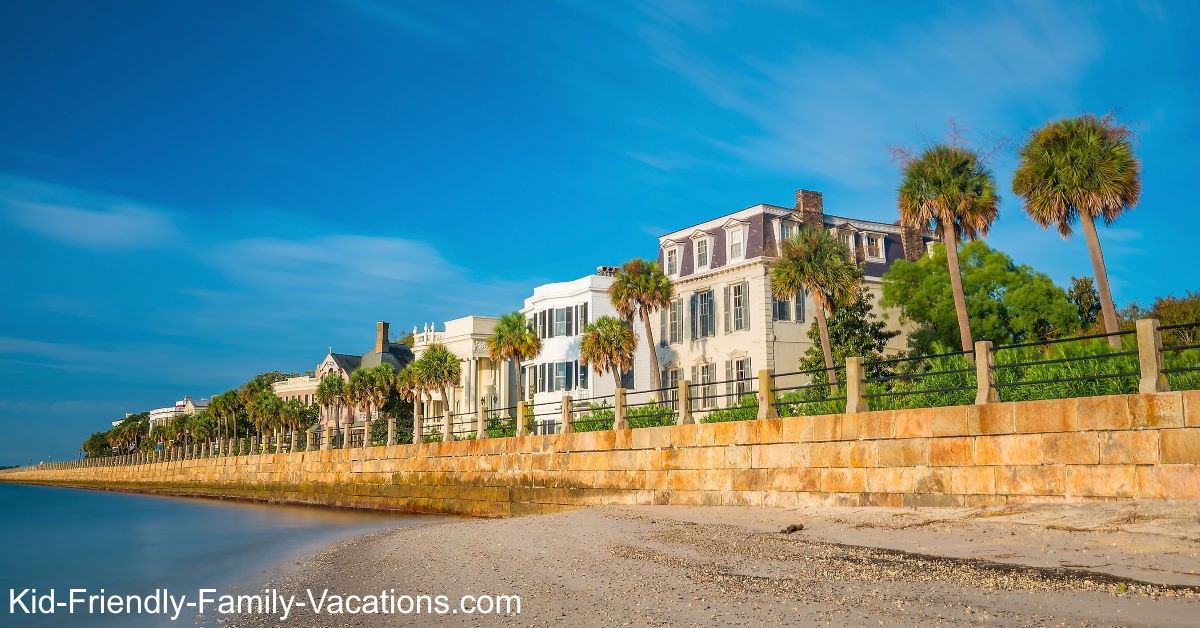 The Aiken-Rhett House was built in the 1820 era. It is a well-preserved townhouse complex.  The home was expanded and updated by Governor Aiken and his wife in the 1830s and the 1850s. The Historic Charleston Foundation took ownership in 1995.  The home is located on Elizabeth St in downtown Charleston.

The Calhoun Mansion is a Charleston Landmark, constructed in 1876. The architect of this mansion was William P. Russell. It is dubbed as the “handsomest and most complete private residence in the South.” This should be no surprise as the construction of the mansion cost $200,000. In addition, the land  where the mansion sits was purchased for $40,000 Confederate dollars.

The Nathaniel Russel House is a National Historic Landmark.  It is currently a museum completed in 1808 by Nathaniel Russell, a merchant.  The home has a three story free-flying staircase and many geometrically shaped rooms.

The Edmondston-Alston House is one of the Historical House Museums in Charleston. It has a
beautiful view of the Charleston Harbor. This is the house where General Lee sought refuge on a
night in December 1861 when a fire in a Charleston hotel where he was staying broke out.

The house was built in 1825 by Charles Edmondston, who at the time had a flourishing shipping
business. For economic reasons, in 1837 Edmondston decided to sell it to a man named Charles Alston, a member of a rice-planting dynasty.

Rainbow Row is a row of Georgian houses painted in the colors of the rainbow. There are thirteen houses in total, and the row is located on Tradd Street, Elliot Street, and East Bay Street. The houses faced the Cooper River in 1740. However, that location was subsequently destroyed during the Civil War.

In 1931, Dorothy Haskell Porcher Legge bought a section of the houses and renovated them. Most of the houses were restored to their original condition by 1945.

You will find more reviews of Rainbow Row on TripAdvisor.

In 1807, the market was established, and until the 1930s it was the place to find meat, vegetable, and fish vendors. In 1840, the current structure, with its entrance that faces Meeting Street, was built. Inside, you will find four blocks of open-air space with various vendors.

The historic market is perhaps downtown Charleston’s most visited shopping destination. It’s open year-round, and is always bustling with sightseers and shoppers. In 2011, it underwent a major renovation. It now features revolving fans and air-conditioning.

The market is located at 188 Meeting Street and intersects with Market Street. The market’s central  location makes it accessible on foot from the cruise ship terminal and from most downtown guest houses and hotels.

You will find more reviews of the Charleston City Market on TripAdvisor. 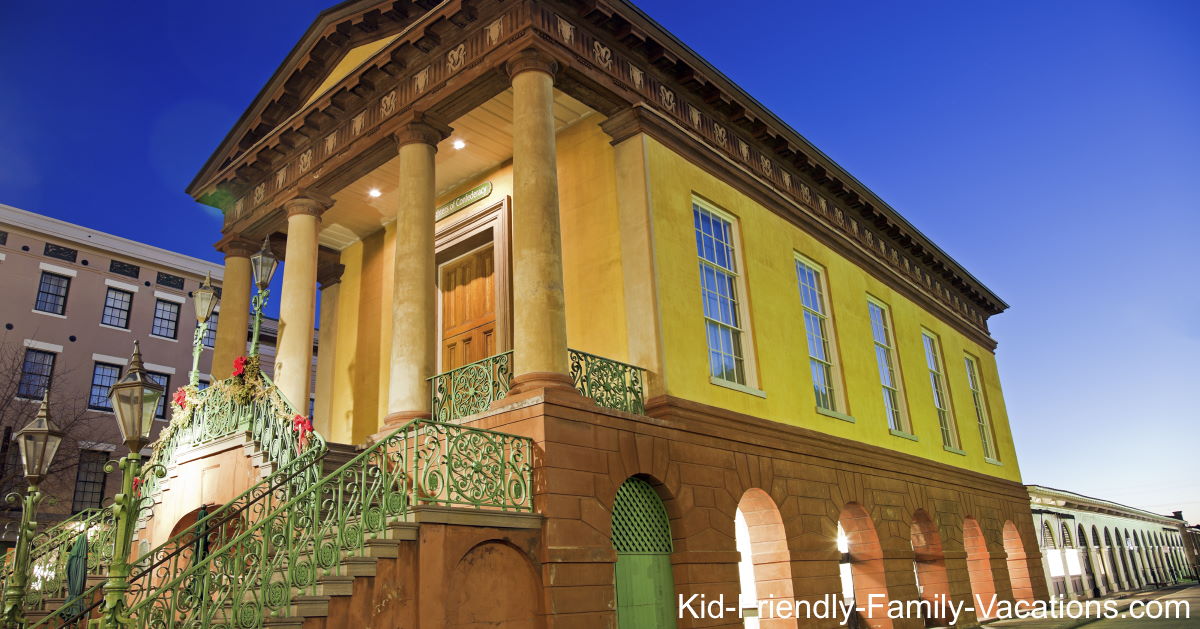 Charleston is the largest and oldest city in South Carolina. Because of its long history, a lot of historical “gems” are tucked away in this beautiful city, one of which is the Old Exchange & Provost Dungeon. It is located at 122 East Bay Street. Its construction lasted from 1767 to 1771.

Unlike the other historical landmarks, which were the private residences of Charleston’s prominent families, this building started out as a public building and still remains as one today. It is now a museum and is currently owned by the South Carolina Society of the Daughters of the American Revolution. 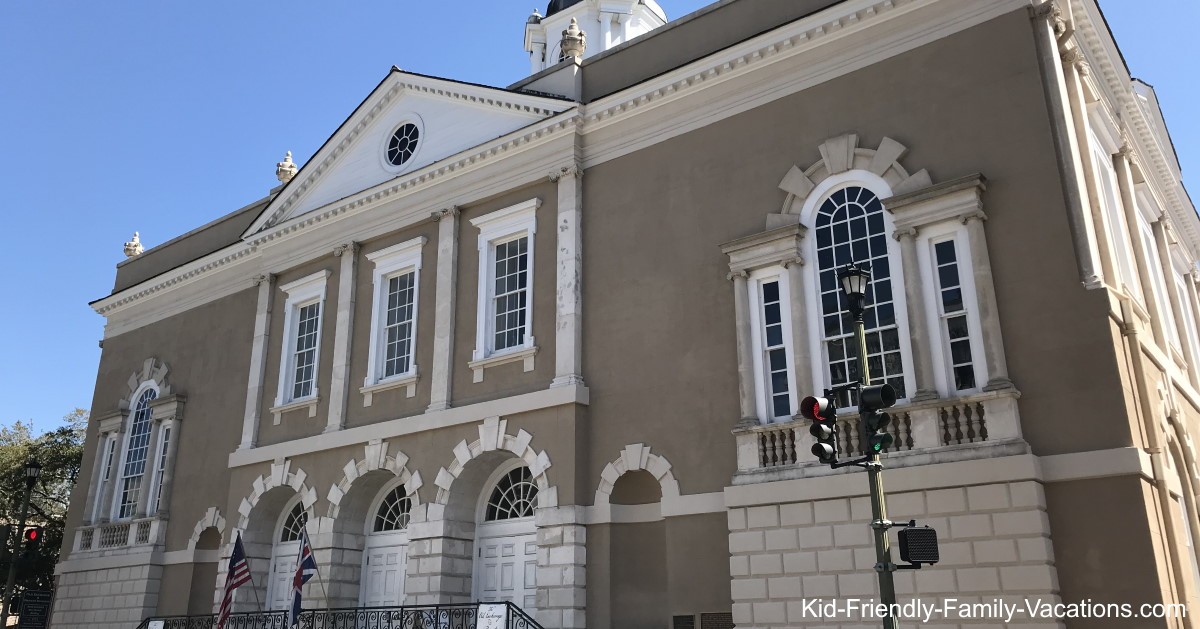 The South Carolina Aquarium is a great place to explore South Carolina’s native plants and animals. It is a 93,000-square-foot infrastructure with different exhibits. You will find a bunch of exhibits from forestry to swamp grounds, as well as a huge aquarium with hundreds of animals and aquatic creatures.

The Coastal Plain is another cool exhibit. Here you will experience firsthand what it is like to be in a swamp. See how alligators wrestle and what their environment is like. You can also view different animals like the dreaded rattlesnake. It also features a number of plant species like the carnivorous Venus flytrap.

The Saltmarsh Aviary exhibit features interesting activities like feeding stingrays. It has a sixthousand-gallon stingray tank where you can feed the stingrays with shrimp. The Saltmarsh  Aviary exhibit also houses various other creatures like herons, the poisonous puffer fish, and the diamondback terrapin.

Read more about the South Carolina Aquarium at TripAdvisor.

The Battery and White Point Gardens

Since 1837, the Battery & White Point Gardens have been used as a public garden. Special events like weddings are frequently held at the beautiful white gazebo at the park’s center.

Walking along the Battery is a great way to spend part of an afternoon in Charleston. There are also many historic walking tours that include the Charleston Battery area.

Under the Battery’s shady oak trees is a stone monument that informs visitors that White Point used to be a location of many pirates’ executions. Long ago, over a fiveweek period, about fifty pirates were hanged under the oak trees. One of those hanged was Stede Bonnet, the infamous “gentleman pirate” (he was a landowner before turning to a life of crime). He was buried in a marsh nearby.

As the Civil War broke out, the Battery & White Point Gardens became a city fortification. Nowadays, there’s an impressive display of historic cannons and mortars from the Civil War used to defend and
shell the city. There’s a Confederate monument at the corner of East Bay and Murray.

You will find more reviews of the Battery and White Point Gardens on TripAdvisor. 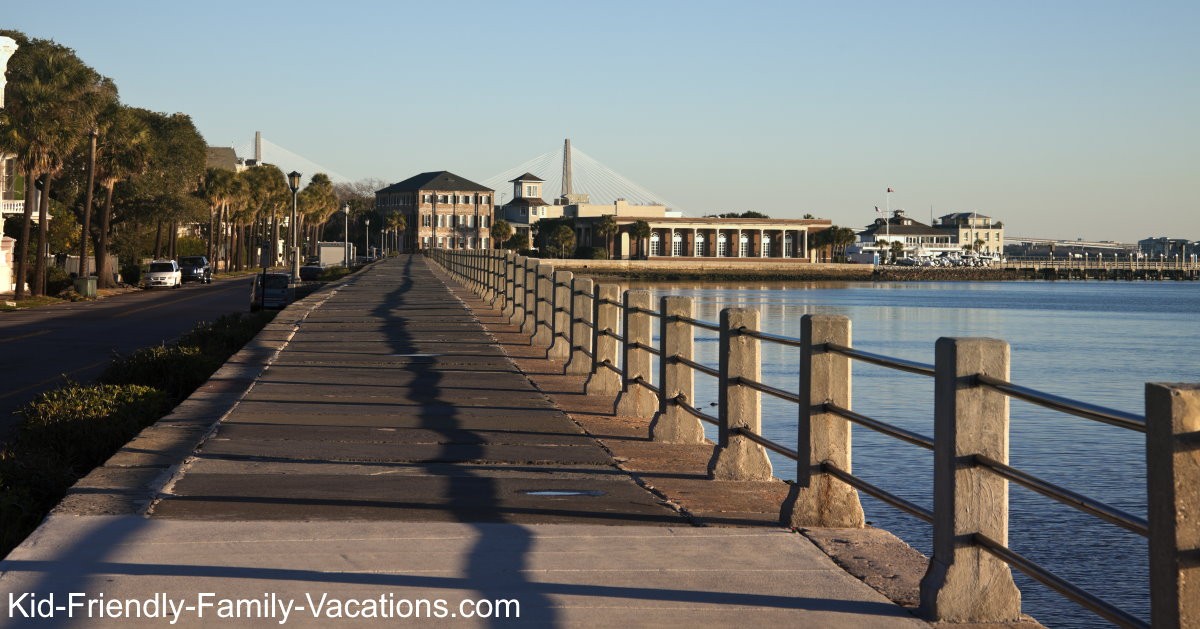 Waterfront Park was recognized in 2007 by the National Trust for Historic Preservation and the American Society of Landscape Architects with a Landmark Award, which distinguishes landscape
architecture examples that contribute to the public landscape’s beauty.

The park’s location—between Adger’s Wharf and Vendue Range—was historically a maritime traffic
center with shipping terminals and several wharves. The area had been in decline for decades. In June 1955, a fire occurred at a steamship terminal in the area. By 1980, the area was marred by gravel parking lots and charred pilings.

The then-Mayor Riley started planning for a park as he first became mayor in 1975. Land acquisition started in 1979, and in 1988, the project broke ground. A September 1989 hurricane struck the city, causing damage to Waterfront Park. The park nevertheless opened in May 1990.

You will find more reviews of Riley Waterfront Park on TripAdvisor. 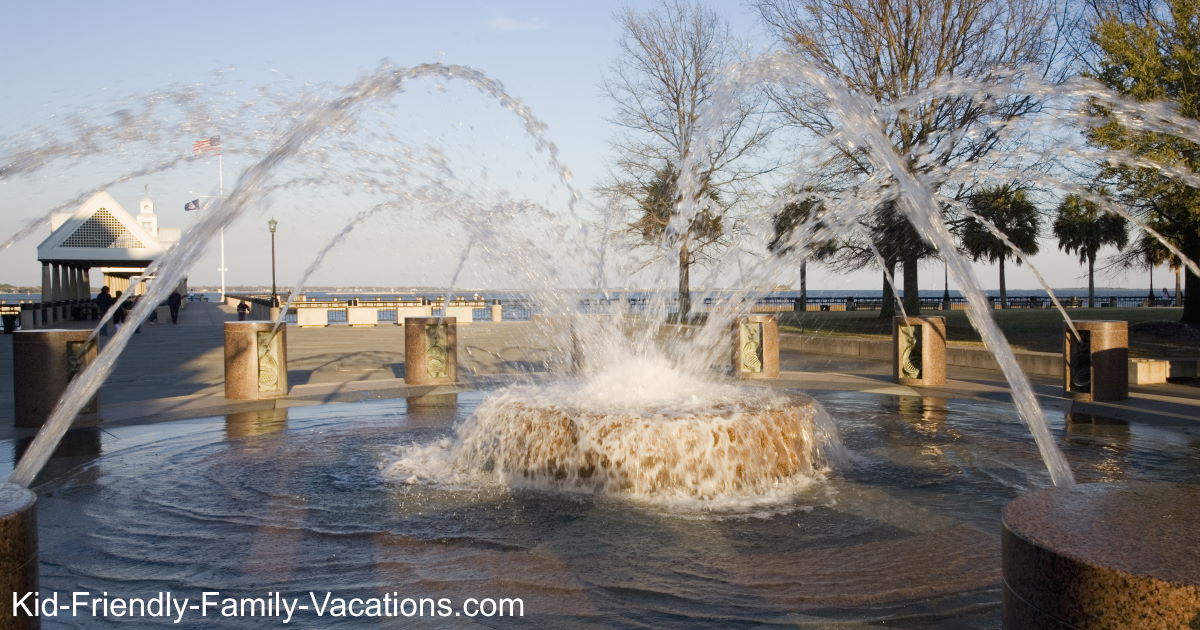 Fort Sumter off the coast of Charleston is where the US Civil War started.

Construction on Fort Sumter started in 1829, and was still incomplete in 1861 when the Civil War began. The fort has five sides and was built to accommodate 650 men and 135 guns. The fort was built after the war of 1812 as a series of forts to protect the US coastline.

You will find more reviews of Fort Sumter on TripAdvisor. 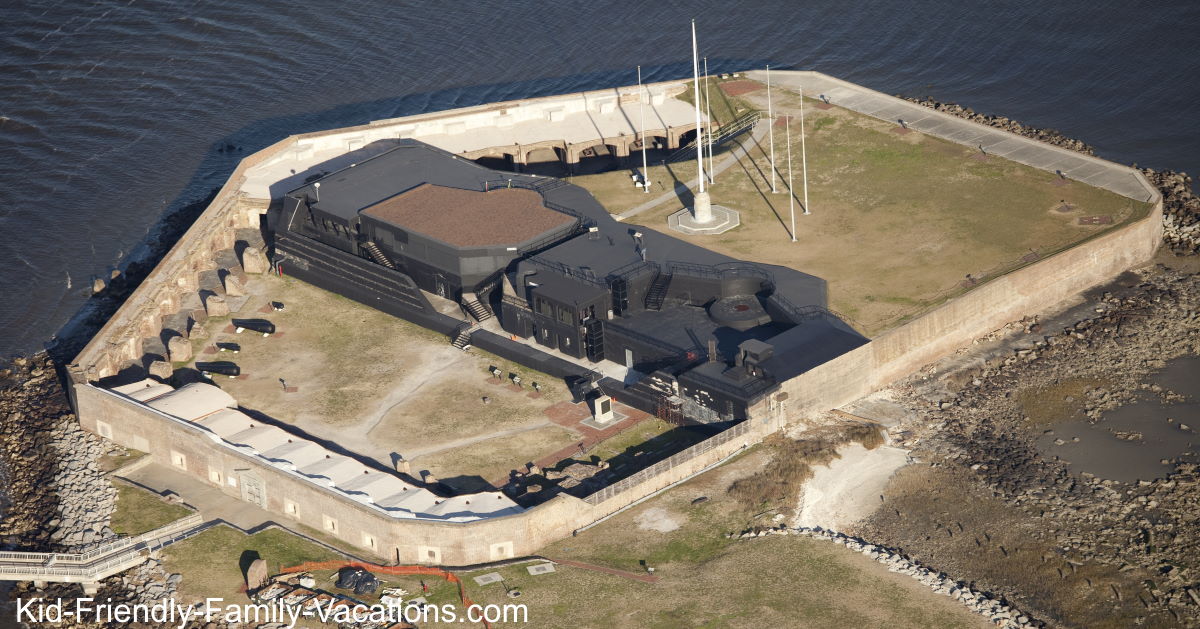 Save Some Time and Get All Four Charleston Coloring Pages Now!